AFTER the Berlin Marathon, our intrepid correspondent Andy Atkinson reports from the front line…

THE trouble with big races – there are so many participants it is hard to spot anyone. The trouble with marathons – the front runners have gone home, are in bed, or on the plane before the tail-enders finish. Thus it was with Berlin.

Some fantastic performances from our front-runners, Rob Corney, Brendan Morris and Gary Tuttle, but did we see them? No.

But just as we were returning from a post-run light lunch, who pops up, but Rob with his sis, Susie, who kindly agreed to take this photo! 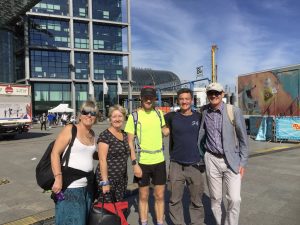 Unable to escape in time, Rob was asked the inevitable: “How does it feel to take the RRs marathon championship?” and answered with usual modesty that it was an honour to be classed with such runners as the former champ. How was his run? “Great for the first 30km.”

Very heartening to hear that even champions fade on such a long run.

This interview begged a comment from the former champion, Keith Russell, who just happened to saunter into our departure lounge at TXL.

“How does it feel?” we ask again. More modesty from Keith: “Rob is a great runner and his achievement is well deserved.” 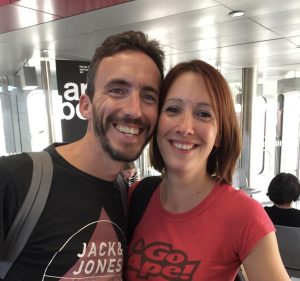 Asked if he will be back, Keith confirmed that he is returning to form and thinks he can get his times down. With Brendan not far behind, it should be an interesting couple of years. Keith was in Berlin to support the Roadrunners, showing great club spirit.

So, the highlights of the marathon viewed from the latter half of the pack…

The day before: In-line world championship skating at astonishing speeds. The winner covered the marathon course in 57.58.

The after-party: After presentations to Eliud Kipchoge, the new marathon world record holder and Gladys Cherono, the women’s winner, we did the best we could on the dance floor, but I had to admit defeat and retire well before the night was out. Past and present champions are made of sterner stuff and continued on into the night. 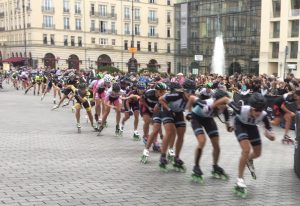 The bit in the middle: I entered the marathon ballot as part of the team “Aaron and the Andrews”. This was the result of a post-parkrun coffee… Mark was later to comment that it was the most expensive coffee he had ever had.

One Andrew and Aaron did pretty well at 3:28:18 and 3:27:45 respectively. The other Andrew (yours truly) was a little further behind at 4:38:19, so it was just as well there were no team prizes to lose. Mark and Aaron were a little disappointed with their performances, but it was hot and both are recovering from niggles and illness.

Although slower than my last two marathons I was quite pleased that I managed to finish strongly and get round without injury.

I am gearing up for the NYC Marathon, so this was a result in itself. 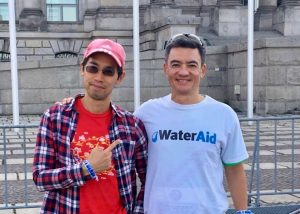 My better half, Liz, had another great run and was the only person I know to enjoy the experience and look relaxed from beginning to end.

Astonished to find herself accompanying a runner with a name (not a number) on his bib, she enquired further. “Ronaldo da Costa… what are you doing here at the back. Did you get up late?” (Ronaldo was the world marathon record holder in 1998 with a time of 2:06:05).

I think that did the trick as, after a few exchanges of where each other lived, he sped off never to be seen again. He finished in 4:03:59… not bad given that he was at the back for the first few miles.

Liz likes to talk her way around a course and was delighted to be accompanied and supported by Tony Eastaway for the first half of the run. She adds that Tony’s support helped her to a new marathon PB. 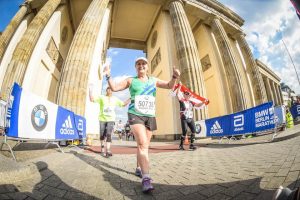 Tony had a difficult run, finishing in 6:07:29. With characteristic grit, he rallied at the end and finished well. I am sure the experience will be good preparation for his shot at the NYC Marathon in November.

Our group of runners were accompanied by a fantastic support crew including Louise Atkinson, Linda Wright, Veronica Andrew, Veronica’s mum and sister. Also running were our neighbours, Linda and Joella Flintoff, supported by Grant Flintoff. 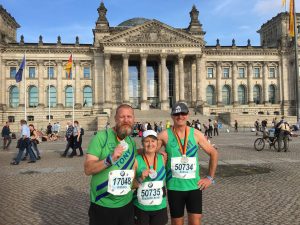 Other supporters we know of include those mentioned above… Susie Corney, Keith Russell and Anna Richmond. It is the supporting teams as much as our fellow runners that make the race such a fantastic event.

And that’s not to mention the live bands on just about every corner of the route. Just as I was flagging at about kilometre 32, Purple Rain belted out from one of them. Was Prince reincarnated? From my position it was hard to tell, but the echo kept me going for a good few miles!

Overall, a five-star race not to be missed!