ROADRUNNERS coach Katie Gumbrell is about to make a comeback following a summer sabbatical. Here she explains the reasons for her absence…

“It doesn’t matter that I was asked me to write this by our resident hack, David Dibben, or that it’s taken 16 re-writes to get it done, this is massively self-indulgent.

“I’ve had a little bit of a break from coaching. Contrary to the rumours (largely self-manufactured), this has not been to assist Gareth Southgate at the World Cup, pregnancy, nor a run-in with the law. Truth is, I have three jobs, a family, hobbies other than running and sometimes those things get in the way (life is rarely about time, just priorities). 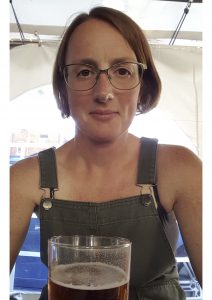 “I was asked to support a new coach, Vroni Royle, for a few weeks, as she aimed to gain her Coach in Running Fitness qualification. This coincided with a couple of Wednesdays of work interference, some volunteering elsewhere and a family crisis or two for good measure. Oh, and an assignment for my MA in Mindfulness in Education and a gym instructor qualification.

“It became rather more straightforward to have a break from coaching for Reading Roadrunners, rather than leave session plans for someone else to deliver.

“While supporting another coach was great development for me, I knew that I wouldn’t be able to offer the best coaching to my athletes at the same time. Since planning for other people takes significantly longer than planning for oneself, I just didn’t have the capacity to do both.

“I also took the opportunity to have a think about what volunteering as a coach means to me. While I’m a relatively new and inexperienced coach, I’ve been a teacher for over 10 years and the two roles aren’t entirely dissimilar.

“For me, that means carrying my professional integrity into my volunteering role, which means being the best I can be on any given day.

“In coaching terms, it’s about knowing my athletes and their goals, and planning sessions around them. That’s fine, since most of the Roadrunners athletes are distance runners and, regardless of the overall distance of the long-term goal (10k, marathon, whatever), a Wednesday night session should suit all athletes.

“Runners can then plan in the training they will need to specify for their event around the Wednesday night. I have done this planning for many runners and they’ve had some great successes.

“My thinking culminated in a decision to restart my coaching group. In order to avoid being accused of poaching athletes, which would be a contravention of the Code of Conduct from UK Athletics, I sought advice from Simon Davis, the club’s Coaching Co-ordinator, about how best to let people know that I was going to be available again. Simon suggested I go via the club committee, which I duly did.

“So, I am going to resume a coaching group on 25th July, once term’s ended and at least some things have calmed down a bit. The group will be aiming to have a good time while training hard, whether the overall goal is to get faster, run for longer, find a lost mojo, regain fitness, pootle about, whatever!

*Coach Katie is pictured in her natural habitat, at her favourite watering hole.