ROADRUNNER Loretta Briggs has enjoyed an amazing marathon success… on a THURSDAY!

At the Dorney Lake Marathon, Loretta…

*IMPOROVED her personal best at the distance by a whopping 12 minutes and..

*GRABBED a Good For Age qualification for next year’s London Marathon.

But the Emmer Green mum, who finished in 3hr 33mins and 58 seconds,  reckons her biggest achievement was in simply FINDING the event. 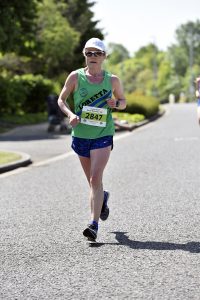 The Dorney Lake race is organised by a company called Running Miles, who specialise in staging low-key events, mainly in midweek, in Berks, Bucks and West London.

“It wasn’t easy to find,” said Loretta. “I did some online digging for marathons before the August cut-off for London GFA entry.

“That’s not easy as most of them are in the spring, or in July when it’s too hot.

“For my Milton Keynes marathon in May it was 29C so things didn’t exactly go to plan and I ran 3:49. But I knew I had more in me this year.

“The Dorney race was so dull, though. It was ten out-and-backs along the lake… not even round it, just up and down, up and down…

“However it is UKAA registered and should hopefully qualify me for London GFA next year. The GFA for my age is sub-3:50. 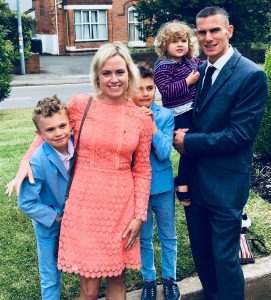 “Also, I was first lady and broke the women’s course record by four minutes, in an albeit small, and slightly bonkers, field.

“Anyone who turns out on a Thursday to run ten out-and-backs over a marathon distance must be bonkers, including me. Definitely running nerd territory. But a win is a win.”

Loretta came home 13th overall in a field of 66 and said: “There were a few obsessives there on the day… 100 Clubbers etc!”

Despite her success she said: “I’m not sure I really enjoy running marathons at all. Past 20 miles is not fun for me. But I’d be very glad to have another pop at London.”

Loretta is married to the Roadrunners’ distance star Seb, and within two days of her fine performance at Dorney there was another Briggs showing his paces. 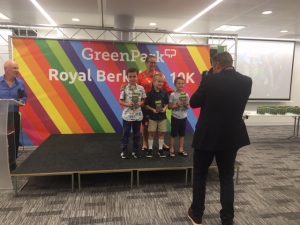 Six-year-old youngest son Tommy made his debut at Reading parkrun alongside his dad and came home in 28 minutes.  “He loved it,” said a proud mum.