The Naturist Foundation where bare is beautiful- By Peter Higgs

Over the weekend I completed a 5k for the club Charity, why would anyone sponsor me to run a 5k, well because this was no ordinary 5k, this was being organised by the Naturist foundation & the race required the runners to be as nature intended, yep au natural, in the buff & I don’t mean Multi-functional head wear.

As the day approached I began to get a bit nervous, I wouldn’t know any of the others runners, I had no support crew going with me & Sheryl advised me that she had overtime at work on Sunday morning, I wonder who she bribed to get that!!.  But at least I wouldn’t need to worry about what kit I was going to wear.

Sunday morning arrived and with trepidation I set off for Kent, the SAT NAV sent me down a long winding county lane.

I approached the gates of Brockenhurst where I was greeted by two fully clothed men in high vis who asked me if I was here for the race and then checked my name off the list and directed me to the visitors car park where a portly man wearing a striped dressing gown open at the front greeted me. OMG he was naked! Suddenly it was all real. I would have to get my kit off as well, but not yet, later, yes later, 2 mins before the race, that would be fine.

Strolling across the car park I saw a guy I knew as a parkrun Tourist, oh god he was naked! & so was his mate. Do I turn & run or casually say hello? So I casually said hello & we got chatting. Seems he was a regular & had done it for the last 5 years. Walking up to reception fully clothed I started to feel out of place as most of the other people were baring all, well what did I expect, I waited in line to complete the registration process & the lady at the desk thankfully had clothes on, but no one else did & the café & sun room was full of naturists all smiling & chatting,” pop over there & see the girls they will write a number on you” I was informed , so I headed over to the number desk, where yes you have guessed it  two naked ladies were perched on the edge of a table writing numbers on runners chests & arms with a red lipstick, removing my top I suddenly felt very overdressed I was the odd one out, I still had trousers on.  A little voice in my head said come on Higgsy its time to man up, so I walked over to the locker room , disrobed & headed out into the sunshine, I still had a good half hour to go before the race started,  to say I was nervous was an understatement, I mean where do you look when there’s a whole load of people on a grassy knoll in front of you and their err tackle is at eye level?

“Any first timers that wants a walk round to familiarise themselves with the course please meet up by the pool” one of the helpers announced & I decided that was the best thing to do, so off went to check out the course which turned out to be quite undulating & through the camp site and a lovely bluebell wood.

We got back and it was time for the race.

After a quick safety briefing, the whistle was blown and we were off. It actually felt good as I passed a few people and exchanged hellos and great day for it etc. The weather was perfect for running and I was enjoying the wind whistling through my hair!

By the second lap I was passing people and really enjoying the run, I had completely forgotten that I and everyone else was naked, until I approached a runner who had shorts on and looked completely out of place. How strange is that? 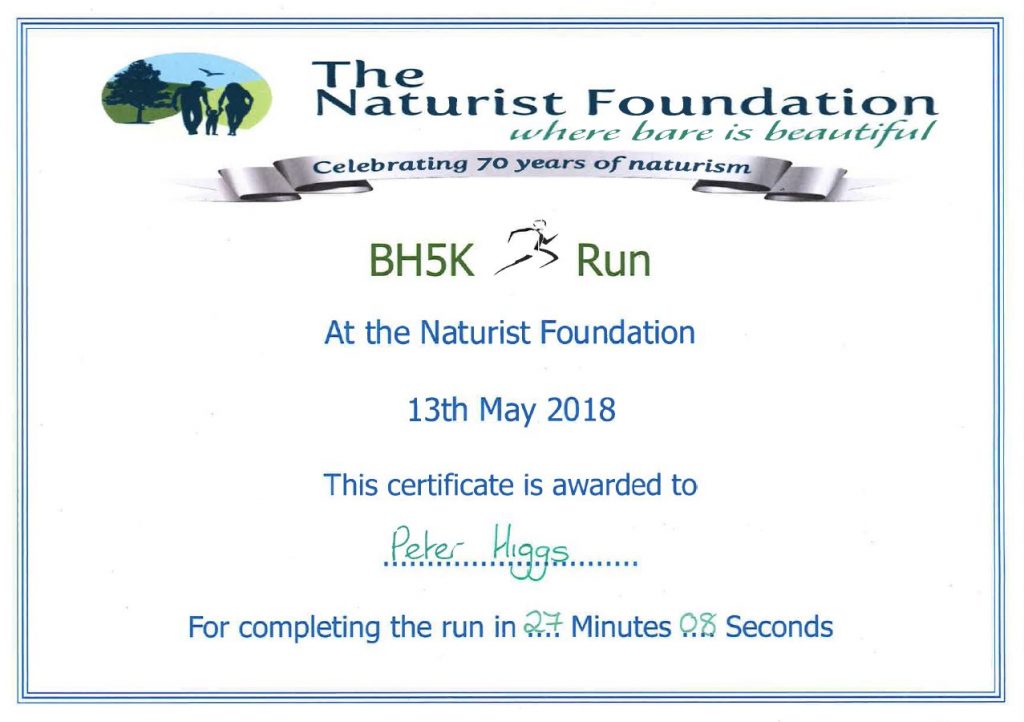 One more lap to go, this was great but actually quite a tough course. Then three laps were done into the finish with a time of 27.08. Not a PB but who cares as I loved the race. At the finish line I started chatting with runners who had already finished and soon discovered that a number of them where parkrunners from the London area as one guy was a Datchet dasher and another was from Woodley parkrun. We all stood around chatting and clapping in the other runners, including a group of ladies who were walk/running and having great laugh.

So I was standing around with 140 odd other naked runners and it felt great, uninhibited plus I felt really relaxed.

After a Burger & coffee it was time for the presentation of trophies & certificates where each person was called up and duly had their photo taken with the organiser / owner of the camp. I then returned to my car, put my clothes back on which felt strange. I then headed home.

There’s another Naturist 5k in Sept and I will be signing up, but this time definitely won’t be as nervous, as getting your kit off & running with other like-minded people is actually really fun.

Thanks to everyone who donated. Over £300 to the club charity is great