We do marathons quite often but every now and again a gem pops up that you just don’t expect. I’d visited Rhodes in 96 so started looking at my videos & photos again before we left, and what really sprung back to mind was just how beautiful this Greek island was.

Would it have changed since the 20+ years since I’d visited? Would I see it differently from a running perspective? I would shortly be finding out, and I couldn’t wait. 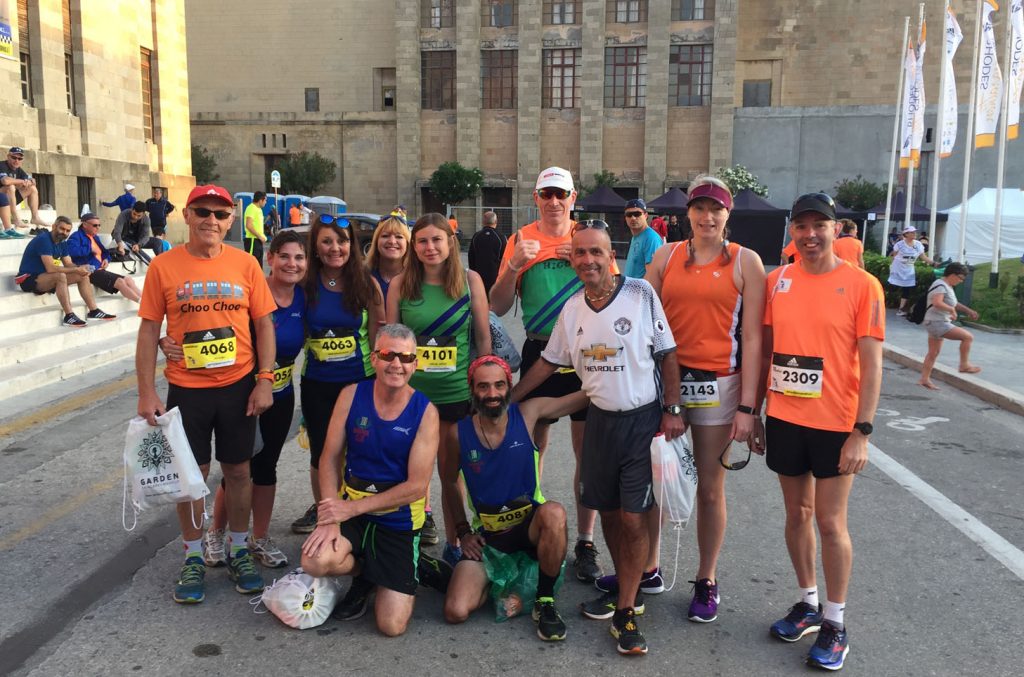 The largest of the Dodecanese Islands Rhodes is a maze of cobbled streets surrounded by sunny beaches enjoying 300 days of sunshine per year. The Old Town is a historic delight to walk around, a true gem from the past. We wouldn’t be running through this but would run past it which was good enough for me.

To the South is Lindos, dominated with its view of the ancient Acropolis, dazzling white houses & turquoise crystal clear waters. A mecca for sun worshippers and history buffs alike. I’d also taken a boat trip here in 96 and loved it, I wondered if it would have retained it’s charm? We’d be taking a boat later during the trip, so for that reason alone I had to survive another marathon plus numerous souvlakis and plates of humus. No Hard Rock Cafés though…Every cloud (In joke)

It was Kerry Eastwood’s suggestion we give this one a go and with it including a 10k & half also it’s an easy sell, as we tend to not just get the hardcore marathon runners to join us, which is always a good thing. It was also great value and included an Adidas t-shirt a pasta party and free photos; It just had to be done. Pete Cook decided to give his camera a miss as his lenses would probably need a seat by themselves. Still, there were plenty of us to grab a pic or two (or even a #TeamJackMon video)… I hear you snigger.

Higgsy & Sheryl, Kerry Eastwood, Peter Cook and Maureen Sweeney stayed at a resort in Kallithea whilst Caroline Jackson & I (#TeamJackMon). Bushy & Pete Morris decided to stay in the city centre as our marathon was to kick off at 7:15 due to the race temperature. Our hotel was great especially the al fresco breakfast and was close the start.

One thing I will say about Rhodes town is even though a lot of the place can have a tacky feel , it’s still managed to retain its culture and a lot of nice places can still be found, which is ideal if you’re a couple travelling together and don’t want to bring England with you. It caters for most tastes which Caroline & I found appealing. We may not be able to enjoy 300 days of sunshine but we booked from Fri-Wed giving us at least 6 days. 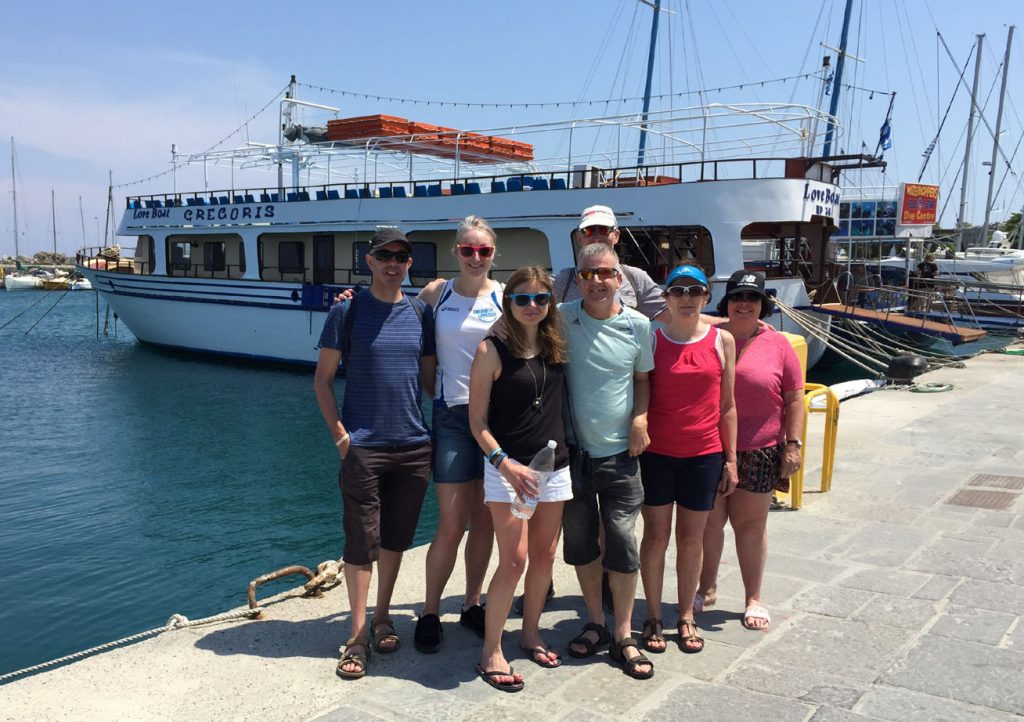 On that note though, our first night was spent touring some of the bars plus catching up with pals & locals discussing our impending marathon. Us RRs know how to party, so much so that we may even write a pamphlet on it. ‘Foreword by Pete Morris & Martin Bush’.

The next day it was a case of going to the expo to pick up our race stuff and catch up with the others. Expo was ideally located close to the start in the town centre, which was easy compared to some races were a private jet wouldn’t go a miss to get to the expo from start line.

We all met up in the town during Saturday afternoon but one thing that totally slipped my mind was that Bushy had never visited. Fine you might say until you realise he must have a lack of Greek souvenirs. Anyway let’s just say the Greek economy was restored with just an hour of his shopping.

The guys staying at Kallithea ate back at their inclusive hotel but us Rhodes crew decided to give the pasta party a go during the early evening. We did notice there were no pasta party tickets in our race bags, so we brought our numbers along just to be on the safe side. The pasta party was to be held at Pane di Capo in Kallithea and we had no idea what to expect but gathered it probably wouldn’t be sitting on grass in the rain.
We made our way to the pick-up point but were slightly hesitant as not one of the crowd looked like a runner, in fact it looked like a gathering for a Greek wedding. Could we be in the wrong queue? I spotted a pair of Asics on one of them so we decided to take a punt.

Pane di Capo which we arrived at was absolutely stunning as it was located next to a postcard style turquoise watered bay. It seems most of the Greeks had got wind of it and decided to invite their families, meaning that the 150 they expected turned out to be nearer 400, so you can imagine the chaos. They had three chefs cooking from scratch and a DJ playing amongst the palm trees. As Pete commented it was more like a wedding scene from ‘The Godfather’. You just had to be there to appreciate it, but believe me it was as good as it gets. 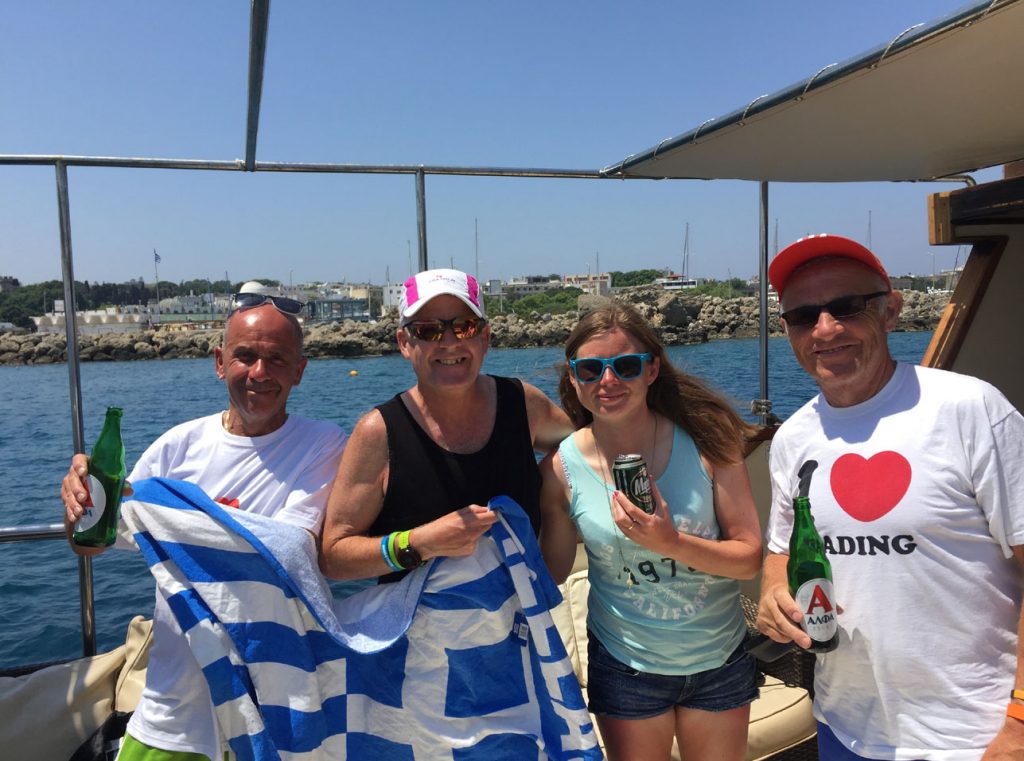 We sat down having a beer and noticed a queue growing which we eventually decided to join. We must have queued for 1.5 hours because of the unexpected chaos. They just couldn’t cope, plus we had the added panic of just 2 hours before the coach took us back. Bushy had latched on to being able to get free beers whilst in the queue so I guess it cushioned the blow slightly. Anyway this was the only slight downside to an otherwise perfect set up. The coaches waited so all was fine eventually. I’ve attended a few pasta parties but this was by far the best despite the queuing. The race is almost worth doing just for that evening and I’ve not even started telling you about the race yet.

We’d anticipated a hot race but as we opened our curtains at about 6am the sun was already blinding us. Caroline had run London the previous week but this would be even hotter, we are used to these kinds of temperatures and really enjoy them but there’s never any chance of running a fast time. Never the less we couldn’t wait to start this one and it didn’t disappoint.

The start area atmosphere was electric. The MC was hollering enthusiastically as the runners and officials posed for pics. We couldn’t understand a word but it had a loud passionate tone that had all cheering. The full and the half would kick off the same time whilst the 10K would kick off at midday, though we were all there to support each other.

Eventually the gun fired as the full and half marathons set off together. There was a festive vibe to all of this, and to me it always seems just that much better when it’s hot and sunny. As usual there were happy kids’ high fiving us as we set off, with the obligatory drones hovering above us to grab that essential YouTube aerial island footage.

Was not long before the endless blue of the Aegean was to our left as we ran alongside the ancient Rhodes walls of the old town. The heat was killing me but the brilliant views more than made up for it. I decided on a strategy of not looking at my watch, though the pacemakers can spoil the fun of ignoring your own time & pace. Parts of this route were unsupported, but it’s no surprise as there were no houses at many points and parking would have been difficult. I pushed on regardless but had no choice to stop at most water stations. I just poured bottles over myself as the temp had ramped up to 27 with no shade. Eventually the route doubled back so was a chance to see where the rest were and cheer each other on. I was ahead and still feeling quite good. It was back past the medieval castle and eventually up a hill with the most breathtaking views. I was not sure of my time at mile 24 but had estimated about a 4:20 finish as spent so much time walking and drinking water and generally enjoying the views. Anyway I had a second strength and speeded up towards the end, little did I know Caroline was in pursuit. I crossed the line in 4:05 which though disappointing for me, I knew I couldn’t have done much better in the sweltering heat.

I raised my arms and clapped the crowd as I crossed the finish. This was better than most foreign marathons I’ve done hands down, as everything was just spot on. From the pasta party to the expo, the marshals, the course, it was nearly impossible to fault.

Caroline was not far behind at 4:06 as was chasing me down, It was big hugs as she crossed the line. Bushy & Pete Morris managed a 4:37 and a 4:58 respectively.

So what about the others? They all ran the half except for Maureen who did the 10k. Whilst Sheryl was kind enough to come along to support us all. Pete Cook did a 1:54 whilst Higgsy and Kerry who looked like they were having great fun running the course together managed 2:34 each. Maureen’s 10k kicked off later at 12:15 so she had a chance to cheer us in before starting her own race in which she managed a 1:09. Results for us all though were more or less irrelevant as this was more about the experience.

I just missed out on an age cat prize as did Caroline but it was so much fun watching the festive prize giving. All us RRs sat in the roasting sun sipping beers on this stunning island. Even Bushy resisted the gift shops and pubs for a few hours (OK two hours)… A friend of ours from the 100 marathon club ‘Costas’ did pick up a prize so we had something to celebrate besides finishing in the blistering heat.

During the prize giving we were approached by the Larnaca marathon organiser. (Larnaca Marathon is twinned with Rhodes Marathon) They offered us free accommodation during that weekend as Caroline will be running her 100th there. It was the icing on the cake to a great day.

The following day we took a trip with Pete to Lindos which I’ve described above. If you go you really have to do this, not only is it a stunning place, but you get a chance to sunbathe on the top deck of the boat and go swimming. If you happen to go with Pete you may even get a few dodgy selfies thrown in. 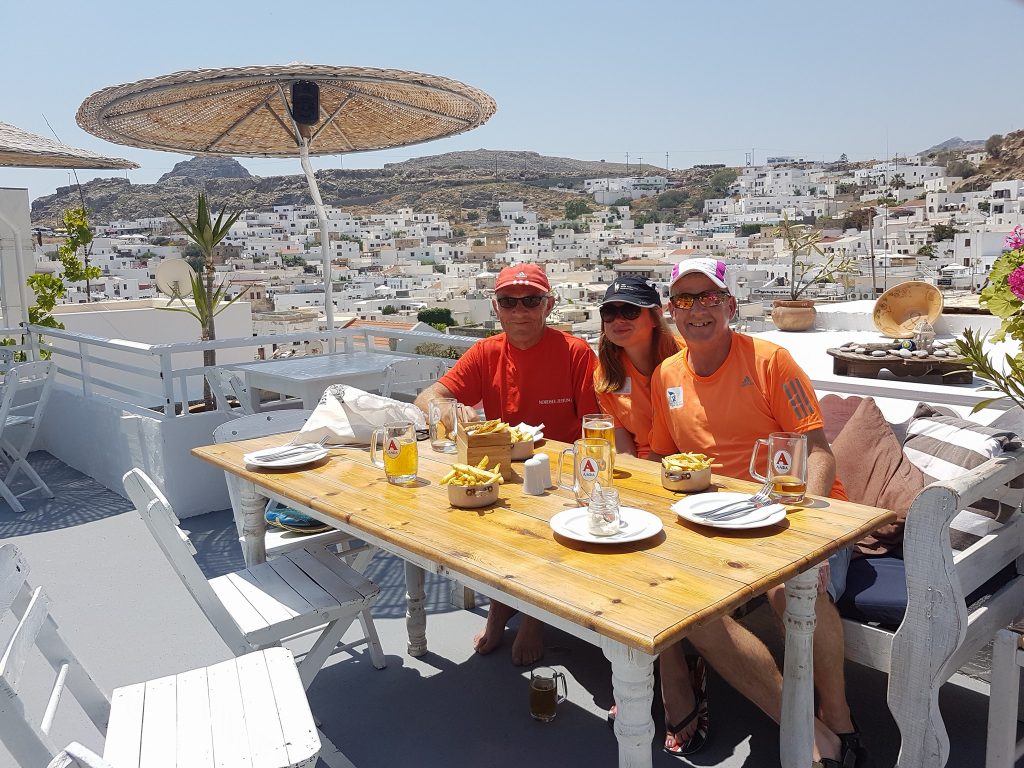 We did another boat trip plus visited the infamous Faliraki and a few other places, which I’ll skip going into detail about. Ultimately all as I have left to say is you just have to do Rhodes Island’s Marathon weekend as you won’t regret it. Oh and don’t forget your sandals & sunscreen J