ROADRUNNER Rob Corney warmed up in style for the London Marathon with victory in the Woodley 10k.

It was his second big win of the year and followed success at the Devon Coastal Marathon as well as setting a new club half-marathon record at Wokingham and his superb third place in the Maidenhead Easter 10. 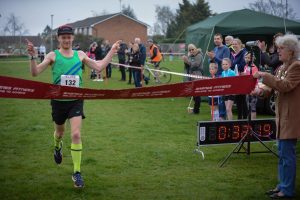 Roadrunners also took ninth and tenth places, with Mark Apsey at last beating his target 35-minutes barrier with 34.49, followed in by Dave McCoy.

Corney was one of three Roadrunners to pick up a Berkshire county championship gold medal, being joined by Alan Freer (MV60) and a new name to FV55 honours, Sarah Bate.

There were also silver medals for Helen Pool and Pete Jewell and a bronze for Mary Janssen.

Both Freer and Corney lead their categories after three events with a perfect 30 points and look assured of overall gold when the competition comes to a climax at the Marlow 5 on May 13th.

A-category first places went to Caroline Hoskins (FV50), who was fourth lady overall, as well Ed Dodwell (MV60, below) and Roger Pritchard (MV70), plus of course Corney in the senior men.

There were plenty of other Roadrunners celebrating personal bests after the Woodley race, most notably Stewart Wing, who slashed just over SIX minutes off his previous figure, finishing in 42:01.

Vince Williams also improved his mark to 45:32 and remarked wistfully: “Apparently that was my idea of taking it easy before London.”

Among the ladies cheering new figures were Paloma Crayford, achieving a pb for the fifth race in a row with 49:36, Fleur Denton in 48:36 (“best since I got married”) and Maria Norville, whose time of 54:59 was seven minutes better than in the same race a year previously.

Sarah Bate (below) made it a double of county bling and PB, Candy Cox got a second PB to follow up her new mark at the Maidenhead 10 and there were also new best times for Peter and Hilary Rennie, Helen Dixon, Suzanne Drakeford-Lewis, Jo Rippingale and Laura Chandler. 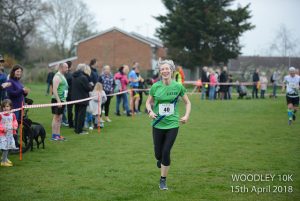 All of them probably agreed with Corney when he said: “The Woodley 10k was a nice race. It was good fun and well organised.

“There were some good runners, so I got the measure of everyone in the first couple of km before opening up a lead.

“It was a comfortable run, about 30 seconds slower than my first 10k in Maidenhead, but I had half an eye on London.

“I like the fact that my two wins this year have come from completely different races… trail marathon and road 10k.”

Corney has promised a renewed assault on county championship medals, club championship points and more race victories after his big date in London.