ROB CORNEY came within an ace of rewriting the Roadrunners’ record books in the Maidenhead 10… but he wasn’t happy!

Corney, who smashed the club record for the half marathon six weeks previously, finished third and led home a long list of Roadrunners county championship medallists.

Alex Harris, Alan Freer and Gemma Buley joined Corney with Berkshire golds, there were silvers for Sally Carpenter and Sarah Dooley and bronze for Pete Jewell, Helen Pool, Sarah Bate and myself. 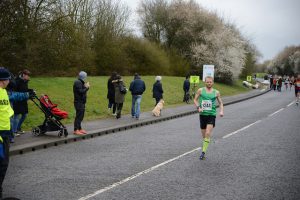 The club’s only representatives at the prize-giving were Caroline Hoskins, after another outstanding performance in the FV50 category, and Tom Harrison, who vanquished his sole opponent at MV80 by the small margin of 34 minutes.

Meanwhile Corney was left to rue what might have been. After a delayed start to the sell-out race he forced the pace and went through 5k very close to Mark Worringham’s club record time of 15mins 38secs.

And although he soon lost the lead to the eventual winner, Dan Wallis of Belgrave Harriers, his next personal best time quickly followed as he clocked a personal best 31:47 for 10k, just outside the club record of 31:38.

“After that it started to unravel a bit,” he said. “An old hamstring injury I struggled with at some of the XC races flared up.” 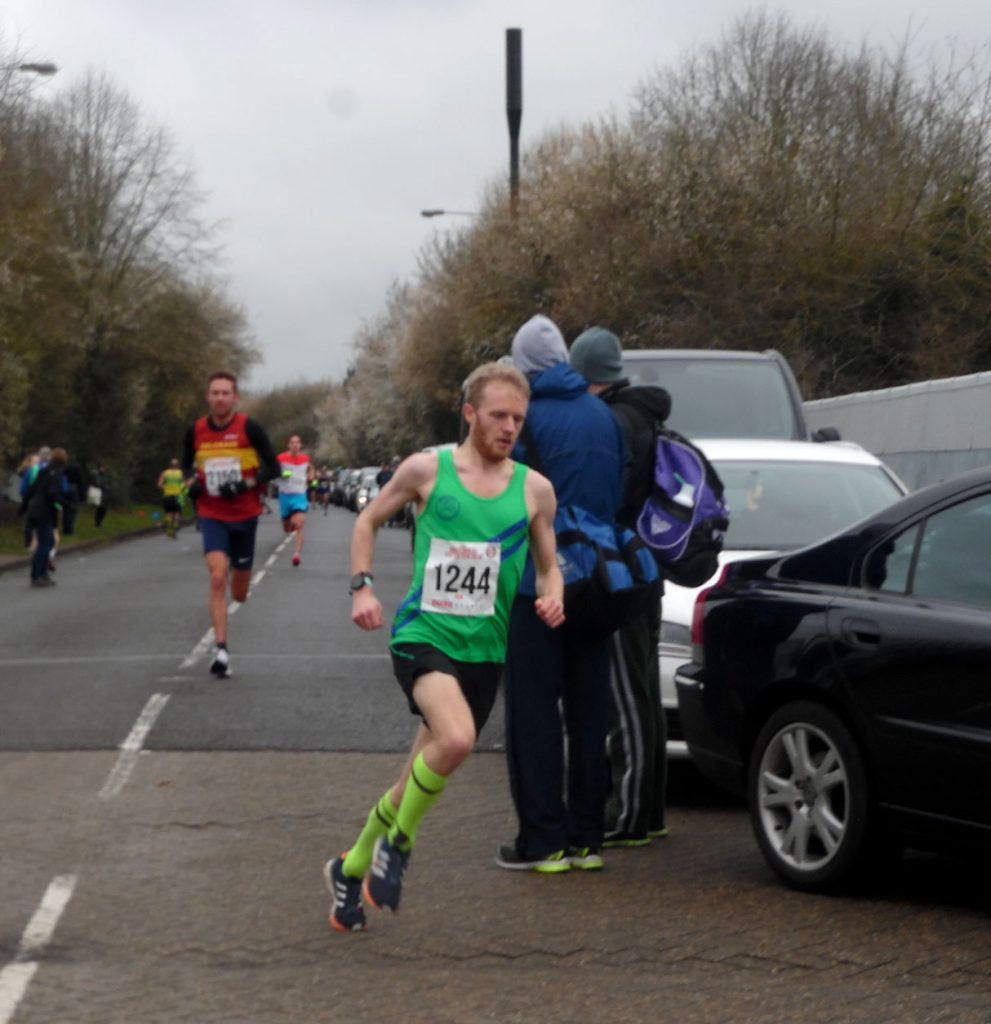 Rob was passed by the Kent runner Chris Greenwood and eventually finished in a time of 52:48, only 23 seconds outside Howard Grubb’s longstanding club record.

“I was not at all pleased as I was on for about a 52:10, which I had to abandon,” he said. “But I will live and learn and at the next flat-road 10 miler I will claim another club record.”

Corney’s final thoughts were for the Roadrunners supporters. “They did the club so much credit again,” he said. “It’s great to get so many shouts of support and it must be tough for the guys from other clubs who get nothing like the same cheers.”

The club’s first lady finisher, Carrie Hoskins, led a long list of personal bests with a sensational time of 1:03.42. She had more than seven minutes to spare over the second FV50, our own Jane Davies.

Both our girls earned age gradings of over 88 per cent for their performances… practically international-class running.

And Carrie’s wasn’t even the best pb in her family… daughter Sophie, the Henley Hockey Club star, improved by over four minutes.

Another notable new mark was set by our top MV50, Alex Harris (1:01.13), now clearly back close to top form leading up to the London Marathon, having been lucky to survive a horror crash while cycling in Lanzarote last year.

The usual suspects in our pb list, Chris and Gemma Buley, were at it yet again, Mrs B returning a new mark over six minutes quicker.

There were also huge improvements for Judith Ritchie (10 minutes) and Stewart Wing (eight). Other men on pb form were Chris Manton, sharpening up for next weekend’s Paris Marathon, Nelesh Kotecha and Tony Long, while firefighter Vince Williams was on red hot form and pilot Dan Brock was really flying. 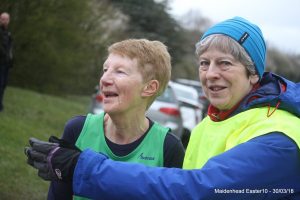 Towards the back of the field my wife, Jill, finishing after the weather had turned from threatening to Noah’s Ark conditions, improved by over three minutes from her time at Bramley, enough to earn her congratulations from the Prime Minister.

Roadrunners’ own leading lady, Carrie Hoskins, is the only competitor of the fairer sex to have 100 points after two rounds of the club championship. Among the men there are perfect scores for Corney, Freer, Harrison and myself.

Looking ahead, ladies of a certain age looking for a bit of success at the Woodley 10k should be warned that Mrs Hoskins will be in the field and won’t let the fact that it is only seven days before the VLM slow her down.

Likewise Corney has targeted that race and isn’t planning to finish second. He has also entered the Marlow 5, leaving those chasing points in the senior men’s section of the club championship to battle it out for the minor placings.

Link to the revised results: here