MANAGER, competitor and blogger SAM WHALLEY reports on a super performance by Roadrunners at the iconic Parliament Hill Fields course…

A WHOPPING team of 35 Reading Roadrunners travelled to Hampstead Heath, London, for the South of England AA Cross Country Championships. Many had heard so much about this event, with its epic uphill start, that they just had to come and see for themselves. 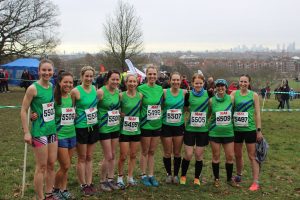 The majority of us travelled by team coach, but our youngest runners were among those who made the journey independently. As we made our way across the site to set up our base, we were just in time to catch a glimpse of our Under 17 runner, James Rennie, doing battle over the 6k course. 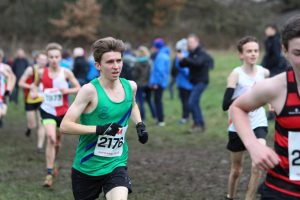 It is not easy being the only runner for a club, so our unexpected cheers were welcome. James  (right) went on to finish 76th out of 230 – an excellent result.

Next up was Under 20 Katie Rennie, James’s sister. Having competed in the Hampshire League this season, Katie is well used to being part of the senior women’s races. In this championship, however, she was required to race separately, in what turned out to be an incredibly small field of only 69 young women. 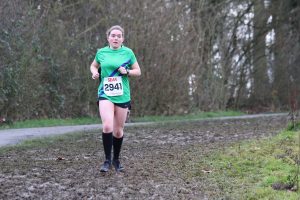 Despite carrying a recent injury, Katie (left) had a strong race and was determined not to be last, which she wasn’t. No doubt she will feel much more at home with the senior women next time. Well done, Katie!

Ten of us made up the senior women’s team, a mixture of regulars and newcomers, with some a little anxious about what lay ahead.

We all expected Gemma Buley to be first back, but I could tell that she was having an exceptional race when I saw her on a part of the course where the front runners loop back; in four years of running this course, I have never seen a club member on this part of the route. 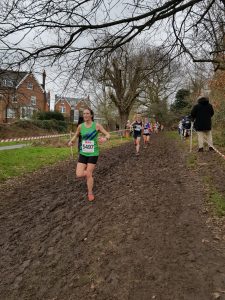 Gemma (right) was delighted with 86th place, and a time seven minutes faster than over the same course at the Nationals last year. What an achievement!

Pip White and Nicole Rickett finished within seconds of each other, and were followed by Liz Johnson, Beth Rudd, myself and Claire Seymour, with the entire women’s team home within 45 minutes.

Claire and I were particularly chuffed that, for the first time, we didn’t miss the start of the men’s race… result! From the post-race chatter it was evident that every one of us had enjoyed the race, and there was even talk of investing in spikes for next season.

The men’s race prides itself on being the only XC championship race still run over the 15k distance. This fact, and its 90 minute cut-off, doesn’t seem to deter people from entering, and well over 1000 men lined up at the start. 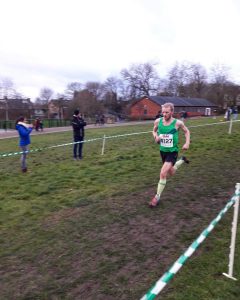 First RR back was, of course, Rob Corney (left), in an incredible 36th place. Rob had hoped to improve upon his 78th place from last year’s Nationals, and he certainly did that. He didn’t find it easy though, and I must admit that the face I saw on the finishing straight was not the one I usually see as Rob cruises around local races; there was real effort here – well done, Rob!

Initial team results were incorrect, as an administrative error meant that some of our men were listed as ‘Reading Road Runners’ and some as ‘Reading RR’, and as such were not all counted as members of the same squad.

When corrected our men were promoted from 23rd place to 22nd, out of 69 complete teams. 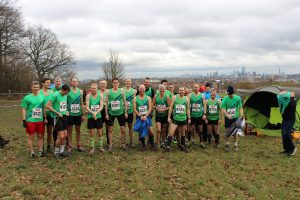 Pete Morris impressed the younger members of the team, as a vet 60 with seemingly endless levels of energy and passion for running. Peter Higgs finished the race pain-free, but sadly also free of course markings, as it was all dismantled around him. Still, he gave it his all.

The day was summed up perfectly by Sarah Alsford: “If a race isn’t hard, how will you get to enjoy that runner’s high?”

Same time next year, everyone?