‘On your marks, get set……..’ and with the gun shot echoing round Horspath Stadium, Oxford, on 30 April 2018, the Vet 35A men stormed down the 100m track, including Reading Roadrunner David Ferris, in an impressive opening event!  David Fiddes and Nigel Hoult followed close on his heels, each giving a very strong performance in the Vet 50 100m and Vet 60 100m respectively.  They did not stop there, David Fiddes also gave a sterling performance in the Vet 50 3000 steeplechase as did David Ferris, together with Ian Giggs, in the Vet 35 400m events.  Simon Denton then beat Reading AC at their own game in the Vet 50 400m event!

When talking about the events in which he participated, Nigel highlighted what many Roadrunners feel, i.e. sprinting is “something most of us don’t do in competition”.  However, the atmosphere at the SCVAC Track & Field is fun and friendly.  Indeed, Nigel recounted that there was “a bit of humour when the starting pistol didn’t go off for one of the races!”  Furthermore, there is a sense of achievement in competing against clubs who focus more on athletics than road-running.  Nigel was rightly pleased which his 100m time of 17.8 seconds, and that he scored 4 points for the club. Furthermore, although Nigel had little time to prepare for his 400m race, because he had been co-ordinating our team and watching the steeplechase, his time was nevertheless impressive!

When it came to the 1500m events, Reading Roadrunners certainly came into their own.  Ian Giggs was a strong contender and Mark Worringham and Pete Jewell were second in the Vet 35 and Vet 50 age categories respectively. Fergal Donnelly flew round the track in just 5 minutes flat! As a non-scorer, he ran with the Vet 50 runners and said modestly afterwards, “I learned how to finally win a race – run in an older age category!”  However, I am sure Fergal would have given our competitors in the younger age category a run for their money!

The Reading Roadrunner ladies team also gave it their all.  Our very own ladies’ captain, Sam Whalley, certainly did. “I am by no means a sprinter”, she told me, “but as ladies’ captain, I feel I should set an example and participate. I was pretty confident I would come last in my 100m and 400m races. Nevertheless, I was cheered on by members of our club and others, and the other competitors, who I assume had excelled at sprinting in their younger years, all said ‘well done’ when I had finished. Once I saw the results, I was delighted to see that I had come within a second of my PB at both distances. With it being the first meet of the league, I can even claim them as season’s bests!”

Like Sam, I was really pleased with my 100m and 400m achievements too, especially since this was my first ever track & field event, but I agree with her that the team spirit of the Reading Roadrunners and our competitors (shown in the individual and relay races) makes these events even more enjoyable!  I would like to thank Sam and Roger Pritchard for encouraging me to take part, Tony Canning for the coaching for the sprint events and for his patience (I did not even have the spikes screwed into my sprinting shoes when I first started training!) and Glynne Jones for his advice.  With   their support and that of Nigel and our team, I had the courage to take part and enjoyed it! 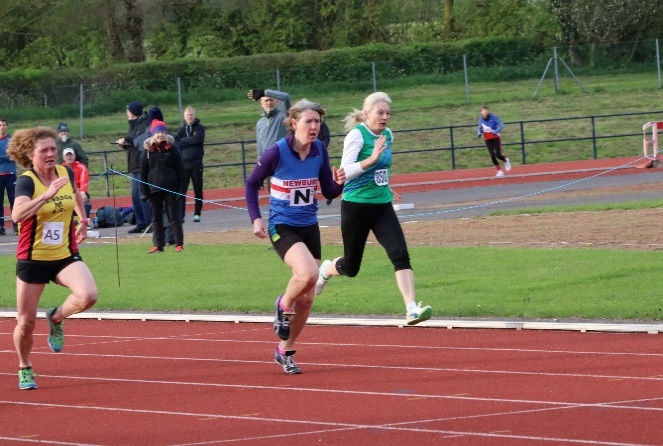 Furthermore, it was not just on the track that Reading Roadrunners showed their prowess!  Ian showed his long-jump skills and Andy Atkinson and Simon Denton skilfully ‘put shots’ or ‘threw the hammer’, scoring points for the Reading Roadrunner team! These achievements were all the more impressive, since these are not events in which Reading Roadrunners normally participate at all.  Indeed, Andy recounted his experiences:

“Not since 1966 had I tried to put the shot.  Some of the other competitors seemed to be capable of throwing (not the right word as you will see) the shot a remarkably long way! I stepped up in the ring, after sagging under the weight of the shot, and took Glynne’s advice not to stand back, twirl or stagger. I grunted and hefted and the shot hit the sand at what appeared to be not far beyond my toes, but actually was 5 metres in! “No put!” was the referee’s response. Apparently, I had let the shot part from my cheek on launch and had effectively “thrown” it, which is not allowed. On the second round I did the same – about 5 metres in, but a “no put”. There were audible sighs of relief, when it was deemed on the third round that the put was good and the 5 or so metres stood.

The hammer is a heavy ball of iron on the end of a steel string! The first time I forgot to swing the ball over my head and went straight into the rotation, got dizzy and threw the hammer beyond the left side boundary – “no throw”. The second time, I remembered the swing, limited the rotation to one turn, but in my elation at getting the hammer beyond the tarmac area, stepped out of the magic circle – foul! The third throw, at 11 metres, was good and the fourth at 11.5 metres, better. I was delighted even though some competitors had put the shot further than my hammer throw! I got two points this time.”

Andy recommends that these events are something worth trying and can be done by anyone with minimal training.  He feels it does require some practice to gain technique, but strength and balance rather than speed are key to success. A discipline different from just running and well worth a go!

Adele Graham took third position in the Vet 50 Hammer event for the ladies and represented us in the Vet 50 long-jump too and javelin events too!  Helen Grieves and Liz Atkinson, following her superb performance in the London Marathon, also scored well earned points for the Reading Roadrunner ladies in the Vet 35 and Vet 60 Javelin events!

The SCVAC Track & Field League Starts has certainly started with a bang!

The Reading Roadrunners team would be top of the leader board, if points were also scored for team spirit and we went home with something as important as any award, a great sense of achievement!

On behalf of us all, a big thank you to Nigel Hoult for organising the Reading Roadrunner team, to Tony Canning and Glynne Jones for the coaching sessions provided for these events and to Sam Whalley and all those involved.  Fergal Donnelly spoke for us all when he said it was “a great evening, expertly organised by Nigel & team”.

We would like to encourage other Reading Roadrunners to take part in this Track and Field League because it is a great opportunity to try something new, support your fellow Reading Roadrunners, get to know other club members, who were friendly and supportive, and an opportunity to have some fun! Sam Whalley recommends “if you are 35 or over, and haven’t yet given these events a go, be brave, and try it!” 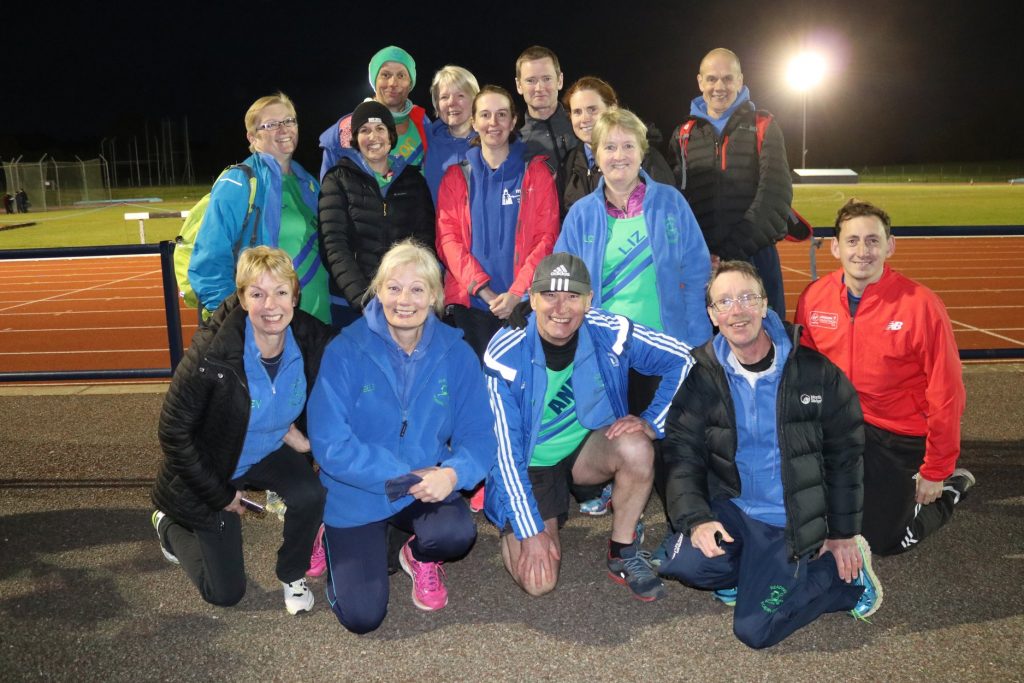