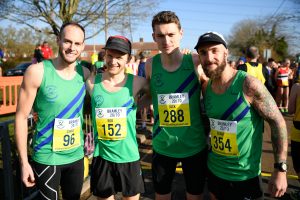 There were team prizes at the longer distance for both our squads, Seb Briggs and Lance Nortcliff helping Richards take the men’s honours and Caroline Hoskins, Sarah McDade and Katherine Sergeant clinching the women’s award.

And, more than 24 hours after the event, the club collected a third trophy from our flagship event following a dispute over the men’s ten-mile team prize.

Newbury, ironically led by our second-claimer Matt Green, were originally announced as winners, but Roadrunners’ men’s team captain Phil Reay contested the award, claiming that the prize should go to our three scorers – Corney, Jack Gregory and Grant Hopkins – on aggregate times rather than positions. FR Systems, who organised the chip-timing and results, later confirmed that Roadrunners were the rightful champions. 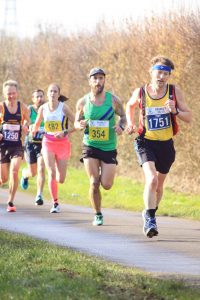 The issue followed an amusing few days of kidology in the Roadrunners camp. Corney and Gregory calculated that they would have a good chance of the team prize if they could find a quick third finisher and they settled on Hopkins as the man to do the job. “No pressure,” they told him. “But…”

The bearded Welshman (left) showed he could take a massive step up with a stunning nine-minute PB, coming home 35th in a time of 62:44 and completing a brilliant weekend after a first-place finish at a parkrun on the previous day.

Corney, meanwhile, was celebrating his SIXTH club record, taking no less than two minutes and 42 seconds off the mark which had stood to Howard Grubb way back in 1995 and more than three minutes off his own PB.

“It’s always nice to break a club record,” said Rob, “and I was quietly confident I’d get it today. The original aim was to try to go as close to 51 minutes as possible, preferably under. It just turned out to be one of those races where you feel good on the day, so when the first mile came up at about 4:45 I just went with it.”

He went though the first 5k in 14:48, a time which would have slaughtered the club record at that distance, and from there the result was never in doubt.

In fact he won by almost five minutes and club chairman Carl Woffington, waiting at the finish, said: “ Rob was so far ahead we were starting to wonder if something had gone seriously wrong with the race.” 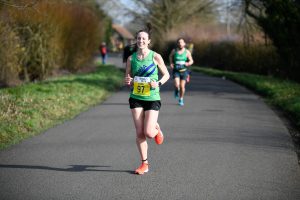 Besides Corney and Hopkins there were personal bests for Chris and Gemma Buley (right) as well as Chloe Lloyd, Moira Allen, June Bilsby and Jenny Boxwell.

But the real bragging rights of the day went to the club’s social secretary Hannah McPhee, who sliced an amazing 20 minutes off her previous best for the course.

Gemma, following up her successful Hampshire Cross Country League campaign, was third lady home behind the Reading AC speedster Naomi Mitchell, and her time of 63:22 represented an improvement of more than five minutes. 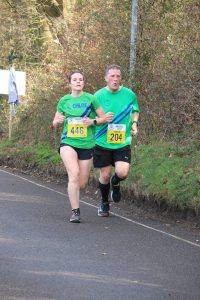 She was helped to second place in the team competition by birthday girl Julie Rainbow, the second FV50 to finish, and Chloe Lloyd (left), who benefited from some well-judged pacing by Stuart Jones to secure a six-minute PB.

Back out on the course, Matt Richards was showing the 20-milers the way home and his finishing time of 1:52:39 took exactly 60 seconds off the club record he set at the same event two years previously.

And while Corney will target an autumn marathon this year, Richards, who beat him at London last year, will head to Boston in April in winning form. “It was not as comfortable as I would have liked,” he said. “I probably went a bit too hard on the first lap but I’m definitely on track for Boston.”

The second Roadrunner under two hours was Seb Briggs, third vet home in 1:57.37, and the trophy was secured by Lance Nortcliff with 27th place in 2:08.28.

Lance’s comment “Matt and Seb were racing but I was on as training run” suggests he will be in good shape for the London Marathon.

In the women’s race our first finisher Caroline Hoskins (2:19.13) had no less than 12 minutes to spare over her nearest FV50 opponent and with Sarah McDade (2:21.26) and Katherine Sergeant (2:21.47) in close support they were convincing winners of the team bling. 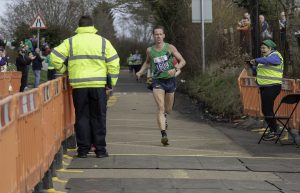 PBs at the two-lapper were achieved by Sarah Dooley, Fleur Denton, David Walkley, Andrew Butler, Alice Carpenter and, by the little matter of 24 minutes, Ben Fasham.

As ever, the true heroes of the day were the behind-the-scenes back-up crew of committee members, marshals, volunteers and other helpers who made the event such a success.

Corney himself said: “Congratulations are in order to the race organisers and all the volunteers who put their time and effort into the race. They should be very proud of the result and are a huge credit to the club.” 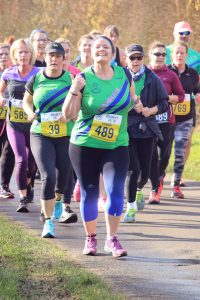 Race director Adele Graham said: “Huge thanks to everyone. You are all awesome.”

Speaking as someone who plodded around towards the rear of the 20 miles race, I would like to add special thanks to some of our noisy, proactive marshals, like Peter Higgs, Simon Denton and Chris Cutting, who provide such great support on the course.

Particular gratitude must go to Sian James, who came straight to the race off a 12-hour flight from Hong Kong to marshal on the nasty incline at mile six, running down to pace runners up the climb while shouting encouragement. Priceless!