ROADRUNNERS celebrated their first appearance in the national road relay championship finals with an ambitious target…. now let’s get there every year!

Men’s captain Phil Reay said: “The future’s bright for us. We’ve set a new benchmark. It was the first time in 31 years we have made it there, but with the strength in depth we have I expect these finals to be an annual fixture on our calendar.”

Roadrunners’ senior men were a highly-creditable 71st at Sutton Coldfield, having been elevated one place from their finishing position following the disqualification of Gateshead Harriers.

Our under-strength line-up on the Birmingham course included just two of the squad who did so well to qualify from the southern finals at Crystal Palace, Jack Gregory and Seb Briggs. 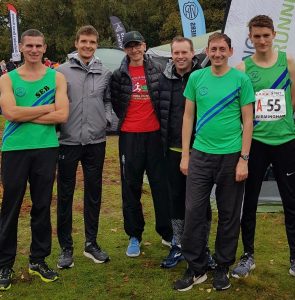 They were joined by two members of the B team, Chris Lucas and Jamie Smith, veteran squad anchor man Ben Whalley, and late call-up Ian Giggs. Reay said: “They all did the club proud.”

Like most of the other teams, Roadrunners front-loaded their line-up with their quickest runner, Jack producing our fastest leg in 18mins 42secs, good enough for 46th place.

Such was the strength of the opposition that Reading AC’s top man, the Great Britain international Jonny Davies, could only manage 12th place. Anyone who saw the clips posted on the club’s Facebook page by the acclaimed film-maker Pete Morris couldn’t failed to be impressed by how fast these guys were racing… and that was only the second-strings!

Among the big names who were missed by the Green Vests after their heroics at Crystal Palace were Matthew Richards and David McCoy, who both ran personal bests in the Chicago Marathon the following day. Matt clocked 2:31:20 and David 2:44:32.

The club had fielded a total of seven teams in the SEAA championships at Crystal Palace, with several club members stepping up to the challenge of running in more than one team after late cry-offs.

“Every single runner gave 100 per cent,” said women’s team captain Sam Whalley later. “It was a grand day out.” 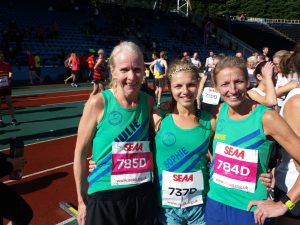 For the women, ever-consistent Carrie Hoskins was the fastest  Roadrunner over the 4.8k course, recording 18.32, followed by Gemma Buley in 18.54 and Katherine Sargeant 19.15.

Both Claire Seymour and Susan Knight went the extra mile by running two legs after two of those originally selected couldn’ t make it.

“It was tough but good,” said Susan. “It was a bit steep quite early on, but it doesn’t go on for ever.” Crystal Palace split times: